What’s GPW?   I’m starting a new blog feature here on Sky Gardens ~ where cool green meets lofty blue, to go along with Greenroofs.com’s “Greenroof/Greenwall Project of the Week” – or GPW.   I’ll note back stories for each selected project and include updates,  new photos, etc.,  and  share why I feel this is a noteworthy and interesting case study.

Also known as Millennium Water, the Vancouver 2010 Olympic and Paralympic Village at  Southeast False Creek (SEFC) will eventually become home to 16,000  residents and commercial users after the Winter Games with  250 affordable housing units in its first phase, a 45,000 square foot community center, three child care centers, an elementary school, community garden, public plaza, and much more.   The 32 hectare (80 acres) SEFC community is a former industrial site on the shores of False Creek near downtown Vancouver, B.C.   More than half of the land is owned by the City, while the remainder is owned privately.

Millennium Development Corporation  developed the $1-billion-plus waterfront property, and the master plan for the sustainable community provided a unique opportunity to develop an urban center for residential, commercial and public use.   The City of Vancouver is to be recognized as a governmental trailblazer and recommended for dictating 50% greenroof coverage for the entire area! 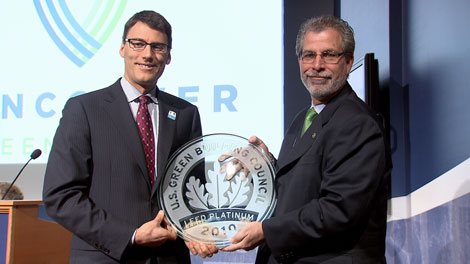 Dubbed “The most sustainable neighbourhood on Earth,”  on Tuesday the Olympic Village in Vancouver’s Southeast False Creek was awarded LEED ® Platinum ND certification by the U.S. Green Building Council for a variety of factors, including its proximity to the downtown core, mix of uses, affordable housing, green buildings and habitat restoration.   And the Canadian Green Building Council announced the Gold certification of all residential buildings on the Millennium Water site.

“This should be a source of pride for residents and an example to the rest of the world.”   ~ Vancouver Mayor Gregor Robertson

Back in 2007 our Design Editor, Haven Kiers, and I included the Vancouver 2010 Olympic Village (Millennium Water) in our inaugural Top 10 List of Hot Trends in Greenroof Design, as a current example of trendsetting sustainability efforts on a  city scale.   We showed it as an example of the #1 category  on our 2007 list for  “Visionary Proposed Projects”  – see the PowerPoint here.   NATIONAL, Millennium Development’s public relations firm, provided these images of the various models for our presentation and the  profile in The Greenroof & Greenwall Projects Database.

Last October at the inaugural 2009 CitiesAlive! World Green Roof Infrastructure Congress  in Toronto, I attended Dr. Karen Liu of Xero Flor Canada‘s presentation, “Special Green Roof Projects in B.C.” where she shared the company’s design and engineering  experiences for their part in the Olympic Village’s  extensive greenroofs.   In the  Master Planting  Plan (see below) the landscape architect, Durante Kreuk,  had  created  vegetated silhouettes of Olympic sports figures atop the buildings, so to achieve this, a combination of various planted Sedum plugs, annuals and lightweight red lava rock  were used.   Shallow aluminum edging helps define the different color and plant zones:

To update the profile, I relied on the excellent case study by The Challenge Series entitled “Millennium Water: The Southeast False Creek Olympic Village –  Vancouver, Canada.”   The story of the development is told in  a seven-chapter book that documents the decisions and challenges involved  in creating such a showcase and world-class example of green  development strategies.   You can access the entire book online above, order printed copies, or subscribe to their newsletter.   Referring to the recent LEED awards, Roger Bayley of  The Challenge Series stated:

“This esteemed certification reflects the dedication to sustainable community development that is found throughout the Millennium Water: SEFC community, and is a truly commendable achievement for all those who were a part of the planning, design and construction process.” ~ Roger Bayley

Of course Vanouver has many beautiful greenroofs and greenwalls, and just one of numerous  other great buildings with a spectacular greenroof not to be missed is the Vancouver Convention Centre Expansion Project, which we’ve  previously highlighted as our “Greenroof Project of the Week.”

Completed just last November, 2009, it will be interesting to see how the Olympic Village rooftop vegetation fills in and greens up after a few seasons, and we certainly look forward to visiting this beautiful city with many eco-friendly projects  in November, 2010.

Kudos to the people of Vancouver, B.C. and all involved in the many years of making the Vancouver 2010 Olympic Village at  Southeast False Creek a wonderful, welcoming place for  the athletes, officials,  and visitors, and for designing Millennium Water as  a future sustainable home to Vancouverites!